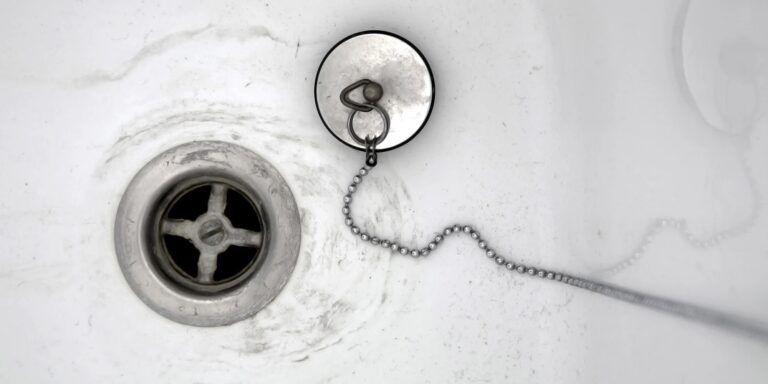 How Does A Bathtub Drain Work?

Bathtub drains are responsible for quite a bit. Not only do they easily remove the water you use in the tub, but they also prevent waste from backing up in your pipes.

One of the biggest components of a bathtub drain is the stopper. There are a variety of different drain stopper designs available.

Meanwhile, the anatomy of the drain itself tends to be fairly straightforward.

Anatomy Of A Bathroom Drain

The drain in your bathroom might have a few different configurations. However, each of the parts are built to do roughly the same thing regardless of the layout.

Your tub stopper is built to stop water from going down the drain, allowing you to fill the tub.

In addition to the stopper, your drain will have a piping system that’s meant to deal with waste and overflow. The overflow pipe will remove excess water from the drain, while the waste system will prevent backup waste from flowing into the clean pipes.

The piping system is made up of a sanitary tee, drain arm, and riser. These pieces are all situated below or behind your tub.

You can identify a lot about your bathtub drain by the type of stopper it has. This will tell you about the age of the system and about the underlying piping mechanisms.

In all cases, the purpose of the stopper is to fill the tub with water.

Round Stoppers With Rings

Round stoppers tend to be a design used with older tubs. Rather than being built into the interior drain mechanism, these stoppers are fitted into the drain hole to plug it.

You can use a chain to attach them to the floor of the tub, or you can keep them detached on the side when not in use.

When the time comes to drain the water, you can just lift up on the ring to remove the stopper.

One potential drawback of this type of stopper is that the open drain may allow more hair and debris through. That means there’s a higher risk of clogs forming in the system.

Toe-touch stoppers are operated using your foot. Since you don’t have to bend down to use them, they’re ideal for people who typically take showers in their bathtub.

That goes especially for people with joint and mobility issues like arthritis.

The spring-loaded stopper can be nudged into place by using your toe. Once you’re ready to drain the tub, you can nudge the mechanism again to pop the stopper out.

These stoppers are built with rubber seals that fit around the drain. The seals create a watertight suction that prevents water from escaping down the drain.

If you notice that your bathtub seems to be leaking, it might be because the seal has worn down.

Fortunately, you don’t need to replace your entire drainage system in this case. You can simply get a fresh rubber seal in the appropriate size and replace it.

With a lift-and-turn stopper, you’ll use your hand to plug and unplug the drain. You simply lift and twist the mechanism into place.

As the stopper is activated, an interior pin will align with a drain notch. Then the stopper drops down into the drain.

As you continue turning the mechanism, the pin locks into the notch. This keeps the stopper steady so that water won’t seep down around it.

To release the stopper, you repeat the turning mechanism but in the other direction. Most designs use spring loaded power.

As soon as the pin is removed from the notch, the springs pop the stopper back up, and the water drains.

These stoppers must be used with drain setups that were specifically designed for them. Other drains won’t have the appropriate notch for the stopper to work.

Flip-it stoppers are a fairly simple type of drain stopper. They are small stoppers that can be placed into the opening of a drain.

Then you’ll flip a lever on the top from one side to the other.

When the lever is flipped, the rubber seal around the stopper conforms to the drain’s edges. This prevents water from slipping by, thanks to the watertight seal.

When you’re ready to drain the tub, all you have to do is flip the lever back and remove the stopper from the drain.

As with toe-touch stoppers, it’s important to note that the seal might wear down over time. If you start to notice unexplained leakage, it could be that you need to replace your rubber seal.

Pop-up stoppers are a type of drain stopper that people operate using knobs and levers. These mechanisms tend to be slightly more complicated, but they can also be simpler to use.

A pop-up stopper is typically built with a lever, a rod, and a rocker arm. The stopper connects to the arm.

When the arm moves, the stopper is pushed into or out of the drain.

The rod connects the arm to the lever. All you have to do is pull down on the lever, and the stopper will slide into place.

Sometimes there’s a knob that you can twist instead of a lever.

To take the stopper out and drain the water, you just have to pull the lever or twist the knob in the other direction.

Trip-lever stoppers also use a rod to connect a lever to the stopper. These are most commonly used with built-in stoppers that sit deeper inside the drain.

A strainer on top of the drain prevents hair from getting into the pipes.

When you push the lever up, the stopper moves into place. You just need to pull it down to drain the tub.

Bathtub drains remove the water from your tub by letting it flow out with the waste. They also protect your pipes from waste backflow.

There are many common types of drain systems that can be used to fill the tub as you bathe.