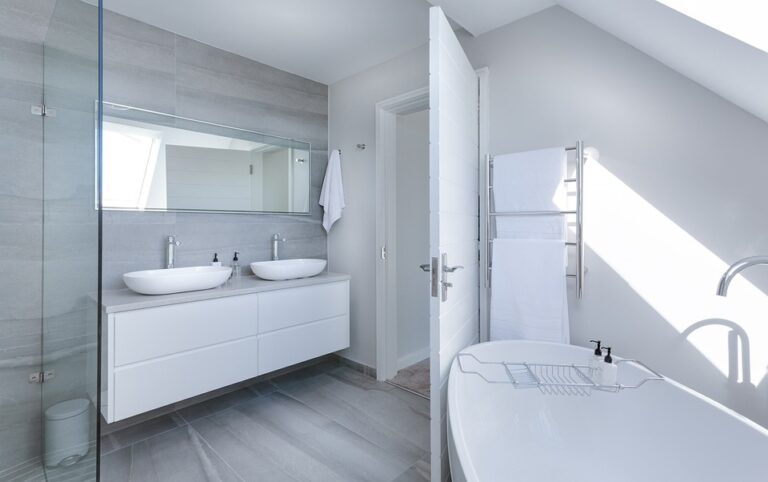 There’s nothing worse than the feeling of scummy water pooling around your ankles as you shower. If your bathtub won’t drain, there could be any number of problems.

Many can be fixed using basic tools and home remedies, but some might require you to call a professional.

What Can Cause A Bathtub Not To Drain?

The majority of bathtubs are built with a stopper. This mechanism keeps the water from draining so that people can take baths.

Different models have different stoppers. Yours might pop up, lift and turn, use a lever, or be a knob that you turn.

Stoppers are meant to open and close with the flick of a switch or turn of a knob. But if they get stuck, the bathtub might not drain properly.

If they’re only partially stuck, there might be slow drainage rather than stagnation.

A stopper is more likely to become stuck if it’s old, rusted, or damaged. If your bathtub is an old model with all of its original parts, the stopper could very well be to blame.

The stopper can be removed from the drain with pliers. Check the mechanism to see whether it has gotten damaged or clogged with hair.

If it is damaged, you’ll need to replace it.

The Drain Is Clogged With Hair

As you shower, hair falls off of your head. It’s a natural part of shampooing and conditioning your hair.

When you lather the soap through the strands, some of them will come out. Maybe you find wads of hair sitting on top of your drain, or maybe they slide down the pipe.

A few hairs won’t generally cause much hassle if they go down the drain. But over time, hair can build up and create an obstruction in the pipe.

That goes especially if the hairball picks up debris and gunk like a net.

If you suspect that hair is clogging the drain, you can try unscrewing the opening. Pull the pipe up and clear it of whatever hair or debris is inside, then carefully screw it back together.

Just be cautious as you do this. If you move the wrong way, the hair might be pushed further into the pipe instead.

The Drain Has Hard Water Build Up

“Hard water” is the term for water with a lot of minerals in it. While it’s not necessarily unhealthy for there to be magnesium or calcium in your water supply, these materials can wreak havoc on your pipes.

The water leaves small mineral deposits over time, which then build up until they block the pipes.

Sometimes a clog will involve a combination of debris and hard water build up. For example, a pipe might develop jagged interior edges because of the calcium deposits.

Then hair and soap get tangled on those sharp edges and create a net, which traps debris, which quickly turns into a full clog.

Deposits from hard minerals can wear down your pipes and cause serious damage. If this is the culprit behind the clog, you might actually be better off replacing the pipes than trying to remove the minerals.

To prevent this from happening, test your water’s pH to determine whether there are heavy minerals.

You might not think of soap scum as something that could cause a clog. This material is the residue left over from soapy products that are used in the shower.

But soap scum is a combination of soap and mineral-rich water. It can build up in layers over time until it slows or completely stops your drainage.

That’s not the only risk of soap scum. The material also attracts mold and mildew.

When it exists in your pipes, it can be a breeding ground for bacteria. That’s bad news for the water that moves through your plumbing system.

With soap scum, as with hard water, preventing clogs is your best bet. In addition to testing your water’s pH level, you can use a mesh filter to prevent the material from sliding down your drain.

Some soap scum clogs can be removed using a combination of water and baking soda, followed by boiling water. Just pour these mixtures down the drain.

Clogs can be caused by a buildup of dirt and grease. While we often think of grease as coming from food, it can also be a byproduct of soap.

The issue with grease is that it solidifies when it gets cold, which happens when it gets deep into your pipes. That can cause major clogging problems.

A mixture of equal parts vinegar and hot water can be helpful, especially if you follow it up with boiling water. Pour the liquids down the drain.

The vinegar is acidic enough to eat away at the grease, but it won’t harm your pipes the way heavy-duty drain cleaner might.

Large objects might get lost down the drain and clog it. You might not even realize that anything has gotten stuck.

It could be something simple like a razor cap or the cap for a shampoo bottle. It might be a small child’s toy that wasn’t rescued at bath time.

Depending on how far down the object is, you might be able to unscrew your drain and fish the clog out.

If you’re connected to a septic tank rather than a city water supply, there are a few warning signs that something’s wrong. Slow draining is one of them.

When the issue isn’t related to a clog, it’s often related to slow septic drainage.

Sometimes this isn’t a sign of catastrophe. For example, your system might struggle to drain the pipes if the ground is saturated with water after a recent rain.

When that’s the case, the issue should go away after it dries off.

The septic system might also back up if you run too much water through it at once. If someone else is showering, someone is doing dishes, and multiple loads of laundry are going… well, your system might simply not be prepared to get rid of all that water at once.

Septic backup that comes and goes isn’t often an issue. But if it becomes a persistent or repetitive problem, you might want to have your system inspected.

Common Ways To Unclog The Drain

Some of the most common DIY ways to unclog a drain are by using a plunger, a plastic drain snake, or boiling water.

There are heavy chemical cleaners marketed for cleaning drains, but these shouldn’t be used because they can corrode and seriously damage your pipes.

What To Do If The Bathtub Still Won’t Drain?

If you’ve done everything you can to dislodge a clog or correct a septic backup, and the bathtub still won’t drain, then it’s time to call a plumber.

A plumber will be able to diagnose the cause of the issue and let you know if it’s something serious. They’ll also have more heavy-duty tools to go after a potential clog.

And if you have pipe damage due to hard water, that’s definitely something you need your plumber to look at.

There are multiple reasons that a bathtub might not drain. Most are related to clogs in the pipes, but this issue can also be caused by a septic system backing up.

Home remedies like boiling water, vinegar, and a plastic drain snake might help. You can even unscrew your drain and look inside to see if the clog is close to the surface.

But if you’re still having trouble after doing all of this, call a plumber for help.