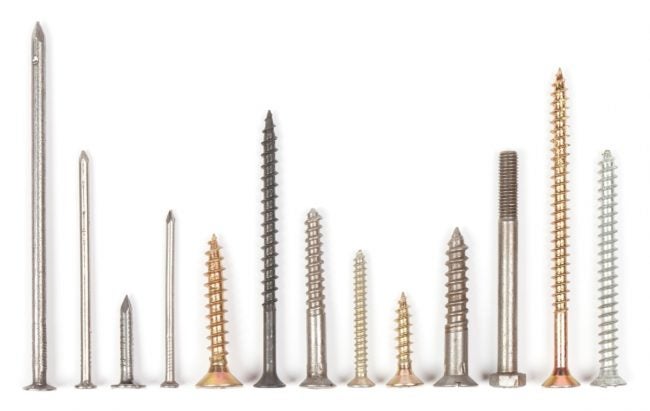 When it comes to drywall fasteners, there are two options: drywall screws and drywall nails.

If you’re getting ready to tackle your first job, you may have a hard time figuring out which is the right choice for your project.

The truth is, when it comes to drywall nails vs screws, screws are usually the better option. While drywall screws are a bit more expensive, they hold better, don’t pop like nails, and some building codes require them.

Here’s what to consider.

However, you have to use drywall nails every 8 inches on the wall, while you can space drywall screws every 16 inches. Considering this, they are closely priced.

But, to install drywall nails, all you need is a hammer. Screws require more expensive tools.

When you factor in the cost of a drywall screw gun, cordless drill, or screw setting dimpler, going with nails may be cheaper.

Final verdict: Drywall nails and screws are similar prices. But if you don’t have a cordless drill or the budget to buy one, nails are the cheaper option.

Since drywall screw guns are battery-powered and have magnetic tips, installing screws is quite faster than hammering nails. Plus, when working with a screw gun, you don’t have to worry about hammering your hand.

Even if you are faster with a hammer than a drill, it takes twice as many nails to secure a drywall panel to the wall compared to screws.

You can measure strength in many ways. And while nails have undoubtedly more shear strength, grip strength is what matters when it comes to drywall.

Screws, thanks to their threads, have tremendous grip strength.

The better grip of drywall screws secures the panels into the wall preventing them from popping out or sagging.

Final verdict: Screws are the winner.

If you’re not familiar, wall pops are when a nail or screw loses its grip and pops out of the stud. When this happens, you see an indentation in your wall.

Unfortunately, nail pops are much more common than screw pops. This is because screws have better holding power, so when met with excess humidity or shifting of a home, they’re more likely to stay in place.

Screws are better than drywall nails in almost every way. Not only are they similarly priced, but they have far greater grip strength, and you can install them much quicker.

The majority of drywall contractors use screws for their jobs, while a handful still use a combination of screws and nails. If you’re doing drywall installation as a home improvement project, opt for screws.