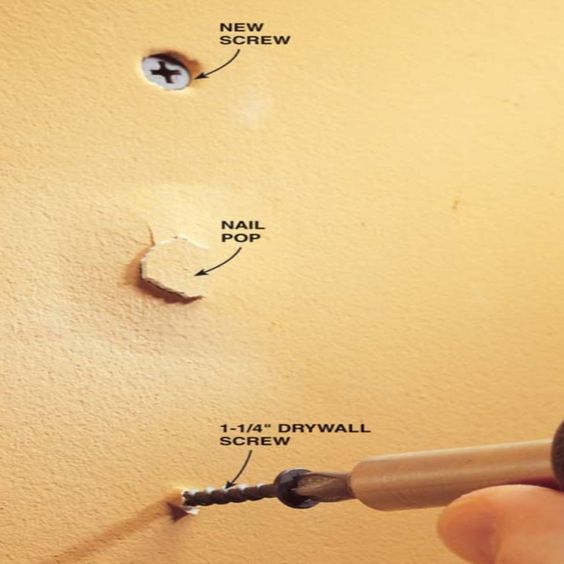 Why Do Drywall Screws Pop Out?

If you’ve noticed a crack in your drywall with a lump behind it, there’s a good chance one of your drywall screws have popped.

While screw pops are a bit unsightly and annoying, they usually aren’t a cause for concern.

Here’s what you need to know about drywall screw pops and when you should worry.

Why Do Drywall Screws Pop Out?

There are two common reasons drywall screws pop out. First, when the contractors installed your drywall, they inserted the drywall screws too deep, weakening them.

Secondly, the studs behind your drywall have expanded or contracted.

Here’s a further look at each scenario.

The Screws Are Too Deep

When you install drywall screws, you should be able to see them. If you can’t, they’re too deep.

When fasteners are too deep into the stud and go through the surface paper of the drywall, they weaken. Over time these weak screws can pop out.

The Studs Have Expanded and Contracted

Another reason drywall screws pop out is due to the expansion and contraction of the studs behind them. When wood experiences extreme temperature swings or moisture, it expands and contracts.

When it does this, the drywall fastener can pop.

This also happens if the humidity is too low in your house, causing shrinkage to the studs.

Is It Common To Have Drywall Screws Pop Out?

Having a few drywall screws pop is pretty common. Think about it: if there are 25,000 drywall screws in a home, a dozen or so instances of drywall pops isn’t a huge deal.

However, a large number of screws popping out in one area is a cause for concern. It could be due to moisture in the wall or incorrect gypsum drywall installation.

In this case, you should have a contractor check it out.

How To Prevent Drywall Screws From Popping Out

If you’re working on a new drywall project, ensure that the drywall screws aren’t driven too deeply in the wall. They shouldn’t break the surface paper, or they’ll weaken and potentially pop.

The other big thing you can do is control the humidity in your home. Keep humidity levels around 40 to 50%. If a room gets too humid or too dry, it can cause the studs to expand or shrink, which causes screws to loosen and pop out.

How Do You Fix A Popped Out Drywall Screw?

If you’d like to fix a drywall screw pop in your wall, here’s what to do:

You’ve now repaired your screw pop and can move on to priming and painting the sections you fixed.

As inconvenient as they are, drywall screw and nail pops are pretty common. As long as you don’t have an entire wall (or room) of pops, there’s probably nothing to worry about.

However, if you do see a lot, this could indicate a high moisture content problem in the wall or improper installation, which you should have checked out.

And if you’re worried about looks, you can easily fix screw pops by moving the screw down a couple of inches, filling the holes with joint compound, and painting.