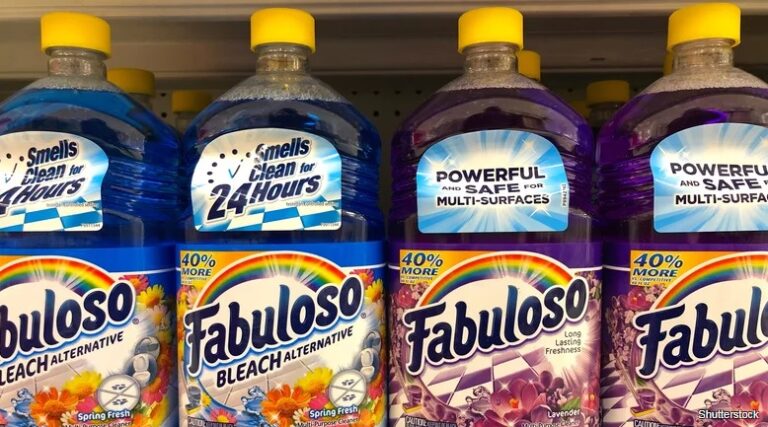 Can I Put Fabuloso In A Toilet Tank?

Fabuloso is a popular cleaner that people often use to clean their kitchens, bathrooms, floors, and other appliances. But it has recently taken the internet by storm because of a viral “Fabuloso toilet hack.”

Supposedly, putting Fabuloso in the toilet tank will keep your toilet clean with every flush, so you never have to clean it yourself.

But is this hack actually safe to do? And does it really work, or is it too good to be true?

Here are all the important things that you should know before trying this “life hack.”

How Do You Put A Fabuloso In A Toilet Tank?

Part of the reason that this hack has gone viral is because it is so simple to do. You don’t want to pour the entire bottle of Fabuloso into the tank, as that will get rid of all of the cleaner in one flush.

You also don’t want to uncap the bottle.

The steps of the hack are as follows:

The person promoting the hack says that the toilet smells amazing with every flush. The toilet water also has the blue tinge of cleaner, which lets you know that the hack is working.

But are there serious potential drawbacks of doing this? Unfortunately, yes.

Can Fabuloso Damage The Toilet Tank?

There’s no inherent danger to putting Fabuloso in your toilet tank. You aren’t likely to run into issues with mixed chemicals like you might with other cleaning solutions.

Because the cleaner is made to kill bacteria and get rid of heavy-duty messes on all kinds of surfaces, it is made up of powerful chemicals. The toilet tank isn’t built to have these chemicals seeping into it constantly.

As time goes on, the cleaning chemicals can cause corrosion to your flush valve, flappers, and connections. You might end up needing to replace these pieces entirely if you want to keep your toilet functional.

Granted, you might not see any problems for a while. Plastic and rubber components take some time to show damage from cleaners like Fabuloso.

But you will decrease the overall life expectancy of the toilet. In addition, you could be liable for repairs if you’re living in a rented apartment.

The inconvenience and wasted time of replacing your tank components might be worse than simply cleaning the toilet — especially because the life hack might not clean your toilet as well as it seems anyway.

Why Won’t This Clean My Toilet?

On the surface, the life hack looks like a brilliant idea. As you flush the toilet, cleaner-infused water flows into the toilet bowl.

The water scrubs the sides of the bowl clean and keeps the toilet smelling fresh, so you never have to get dirty with a brush again.

Every toilet has a rating called GPF, or gallons per flush. This refers to the number of gallons of water used per flush.

Standard toilet designs use 1.6 gallons with every flush. The tank then refills with water for the next flush.

The 1.6-gallon measurement is important. The higher the water amount, the more pressure there is behind the flush.

That allows for more powerful removal of whatever is inside the toilet bowl.

But when you put a bottle of Fabuloso into the toilet tank, you reduce the amount of water that the tank can hold. With a full-sized bottle, you might cut the volume down from 1.6 gallons to 1.2 gallons.

That means less water flowing into your toilet bowl and less powerful cleaning.

It’s easy for unmentionable substances to get stuck to the sides of the bowl. A powerful flush is necessary to clear it.

If your flush isn’t powerful enough, you might end up needing to clean your toilet more often than usual, even despite the Fabuloso.

How Long Does Fabuloso In The Toilet Tank Last?

Fabuloso isn’t made to be put in your toilet tank. It’s hard to say how long a single bottle of the stuff will last.

The original Tiktok hack doesn’t explain how much cleaner seeps from the bottle with each flush, nor how often the user needs to replace the cleaner. However, the poster later updated to say that each bottle lasted for about a week prior to needing replacement.

That can get costly very fast. It’s probably cheaper to make do with a traditional cleaner and a scrub brush!

Fabuloso Alternatives To Clean The Tank and Smell Good?

You can use toilet tank cleaning cubes to help clean your toilet. When you place these in the toilet tank, they help to get rid of limescale and hard water buildup with each flush.

If you want to clean the tank itself, you can use a mixture of 2 parts vinegar to 1 part baking soda. This natural remedy will clear your toilet tank of stains without any hassle.

There’s nothing inherently dangerous about using Fabuloso in your toilet tank, but you could damage your toilet over time. In addition, the reduced flush power could cause things to stick to the sides of the bowl.

You might end up needing to break out the scrub brush more often.

If you want a toilet tank cleaner, it’s best to use products that are actually designed for this purpose instead.