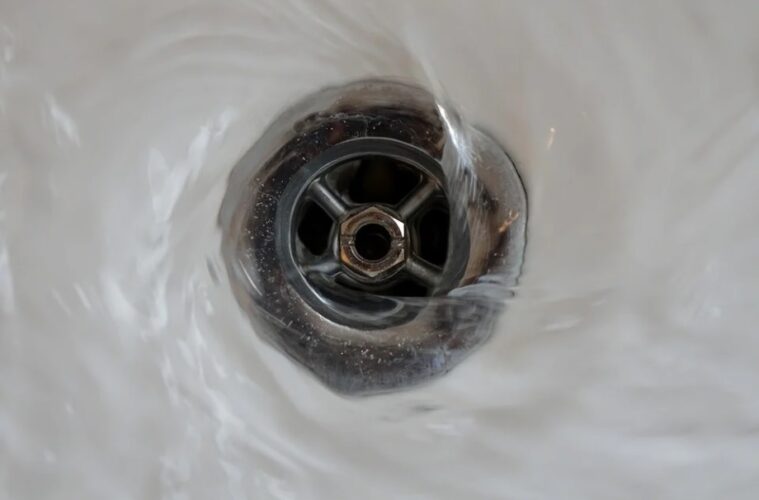 There are a lot of reasons homeowners might be thinking about the material of their sink drains. Maybe you’re doing a bathroom remodel for your latest home improvement project.

Maybe you’re just getting a new sink or faucet for your lavatory.

Regardless of the reason, this guide will tell you everything you need to know about plastic and metal sink drains. We’ll go over not just pop-up drains and stopper assemblies, but also the plumbing pipes underneath.

That includes the tailpiece (the straight part that extends down from the drain), the p-trap (the curvy pipe), and the drainpipe (the part after the p-trap that either extends back into the wall, parallel to the countertop, or goes directly into the floor).

Now let’s talk about the main differences between plastic and metal sink drains.

What Are Plastic Bathroom Sink Drains?

Most drain assemblies are plastic these days.

They can be made from ABS plastic or PVC. For bathroom sinks, you’ll typically go with PVC.

For sinks that will have to handle hotter water, as kitchen sink drains, you’ll want to go with ABS plastic pipes because of the material’s higher heat tolerance.

The main advantages of plastic are that it’s cheaper than metal, is easier to work with, and is corrosion-resistant.

When we say “cheaper,” we don’t just mean the cost to purchase the drain and pipes themselves though. The fact that plastic pipes are softer than metal ones (and therefore easier to work with, as we already said), means that the tools you need to cut them to fit under your sink are much cheaper.

In fact, you can generally cut plastic pipes with a handsaw, which most homeowners probably already have on hand. That means that there’s no need to buy a new tool, let alone a costly specialty tool.

But that’s not the only reason plastic pipes are easier to work with than metal ones. The plumbing fixtures are also easier to use.

Nuts for plastic pipes tend to have wings on them, unlike those for metal pipes, which makes them easier to hand tighten. Even plastic washers and flanges can typically be hand tightened.

One downside to note is that drain cleaner can damage PVC pipes. This is because it can reach temperatures up to 200 degrees while working on clogs, which is above PVC’s maximum temperature tolerance.

That’s not an issue with ABS plastic pipes, though, because they have a higher maximum temperature threshold.

Even for PVC drain lines, though, you have plenty of options for dealing with buildup and blockages. Instead of drain cleaner, you can use vinegar and baking soda, a plunger, or a drain snake to remove clogging and buildup.

If those strategies don’t work, you should call a plumber.

What Are Metal Bathroom Sink Drains?

Metal sink drains are more common in older homes, but they are still seen in some newer homes today. Older metal pipes are usually made from cast iron or galvanized steel, while new ones are usually copper or stainless steel.

The main advantage of metal drains is that metal is more resistant to heat than plastic is, even ABS plastic. That’s why metal drains are more commonly used for kitchen drains and strainers.

That’s not as much of an issue with bathroom drains that don’t deal with such hot water and certainly not in the same amounts. However, the higher temperature tolerance is an advantage in that you can use just about any drain cleaner in most metal drains without a problem.

Copper tends to oxidize, but it doesn’t rust. The result is primarily just a difference in appearance, not functionality.

For metal drains, especially older ones, you’ll generally need pliers or a wrench to tighten the slip joints and other drain fittings. That’s less convenient than with plastic, but you still shouldn’t need to pick up specialty tools from the hardware store to install your drain fittings.

What you may need a specialty tool for is to cut pipes to the correct length if you’re opting for DIY drain installation. For best results, you’ll need a specialty pipe cutting tool or an angle grinder to cut a metal pipe.

You can generally do the job with a hacksaw, a vise to secure the pipe while you cut, and a whole lot of patience, but this is a much more difficult and time-consuming route to take.

Plastic VS Metal Sink Drains: Which Is Best?

The short answer is: it depends. Generally, you’re just going to be limited by what is cheapest and most available near you.

The exception being larger buildings where building codes may call for metal pipes over plastic.

If you’re in a large commercial residential building, such as an apartment complex or condo building, then you’re going to almost certainly have to go with metal because of building codes. This is mostly a safety thing, and it applies to all DWV pipes, or drain, waste, and vent piping.

You’ll also have to be careful with lye-based drain cleaners if you have PVC or ABS pipes as the heat created can cause the pipes to warp and leak. The same goes for applications with boiling water, though modern plastic pipes will generally do just fine in something like a kitchen sink.

The big thing here is going to be cost and DIY-ability. In general, plastic is going to be cheaper for you to install across the board so if you’re doing things yourself and have the option, that’s almost certainly the way to go.

If you’re paying a plumber to do the job for you, then the cost of metal pipes is probably not going to cause the total at the bottom of your invoice to go up all that much, but you will pay a little bit more.

Then again, corrosion is more possible with metal pipes than plastic even if it’s still pretty unlikely to cause an issue, so there’s that to keep in mind as well.

Whether you DIY the installation of your bathroom sink drain or call a plumber to do it for you, it’s important to choose the right material.

For your pipes, on the other hand, (which is also where it makes a bigger difference) the decision is up to you. Hopefully, this guide has provided you with the information that you need.