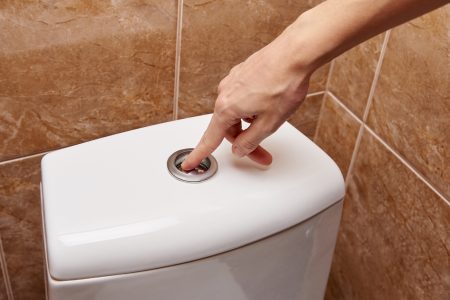 The flush toilet has been part of society for more than 200 years, although it has gone through significant upgrades during that time. Nowadays, most houses are built with plumbing and indoor toilets.

But homeowners might be surprised by how many toilet flush systems there are.

Every flush system has benefits and drawbacks. Let’s take a look.

There are three main toilet manufacturers in the US: American Standard, Kohler, and Toto. Each one has created patented technology for a more powerful flush with a lower amount of water.

The less water you use per flush, the lower your water bill will be.

These are some of the different types of toilet flush mechanism:

Though gravity flush systems are the most common type, enhancements to the toilet tank, siphon, nozzles, and trapway can make for a better full flush experience.

Gravity systems use a traditional setup to remove solid and liquid waste from the toilet. The contents of the toilet are removed when the flush valve opens and gallons of water flow through the pipes.

The water flow pushes the waste down and scrubs the toilet bowl, preventing a clog.

The water tank is mounted atop the bowl. Water flows downward into the tank through siphon flush jets.

Most toilets use a gravity-based system. But if you have a toilet installed below the sewer lines in your basement, then you might need something different.

The pressure-assisted system uses gravity as its base component. But it also incorporates compressed air.

With this system, even a partial flush can be powerful enough to clear the bowl.

You’ll also see this type of system used in toilets installed below the sewer line. Since gravity can’t be used to flush them, the compressed air design helps to force the materials up through the pipes.

Most below-ground toilets have a macerator to break up solid waste before it moves into the pipes.

The main mechanism of action is a plastic tank referred to as a “pressure vessel.” It is found inside the toilet tank.

Rather than filling with water, this vessel fills with air. When the water moves through the water supply line, the air pressurizes it.

The pressurized water moves swiftly around the toilet bowl and through the pipes. Since they’re so powerful, they are significantly less likely to clog than basic gravity systems.

However, they also tend to be on the loud side, which some people dislike.

Dual flush systems can appeal to people who want to be as eco-friendly as possible. Have you ever seen a toilet with two flush buttons?

One is meant for solids and the other is for liquids.

When you push the liquid button, the toilet uses less water to refill. That way, the waste is removed without any excess water.

When you push the solid button, you get a more powerful flush that uses more water. This helps to scrub the bowl and siphon out large quantities of waste.

The majority of these models are built with buttons on the tank lid. However, you may also see some that use flush levers instead.

The tank itself uses dual flush valves. These are assembled on top of the regular valve.

Depending on which button is pushed, the valve will seal and release a certain amount of water into your toilet bowl. The liquid button will allow less water flow, while the solid one will involve more water.

Toto is the inventor of double-cyclone technology. Though other companies may have patented their own versions, only Toto has the rights to use “double cyclone” as a descriptor.

Most of the company’s modern toilets incorporate this technology.

When you flush a double-cyclone toilet, the water will flow through two sideways-facing nozzles. Most competing options only use one nozzle.

The double nozzle setup allows the water to swirl around the bowl with the force of a cyclone. That means that more of your waste is being flushed each time, leading to less overall maintenance.

That’s why Toto is one of the most popular companies on Amazon.

Each “cyclone” occurs because of the direction of the nozzles. Since they spray water sideways, it is able to swirl quickly around the bowl before finally settling due to gravity.

Toto has another option called a tornado flush system. This has been incorporated into many of their most recent models.

It improves upon their cyclone technology.

Rather than using just two jets, these toilets have three sideways jets. This allows for water to swirl even more forcefully, more like a tornado than a cyclone.

In addition, this flushing system is quieter than the cyclone one. Since water enters through more points, there’s less noise as it flows through the pipes.

Tornado flushes are ideal because they clean around the rim of the toilet bowl, which can be difficult to reach with a scrubbing brush. Overall, they increase the amount of time between cleans, and they make maintenance simpler.

Toto has two other patented systems that are used for flushing toilets: the E-Max and G-Max.

They have been approved by the EPA as meeting ideal water conservation standards.

G-Max and E-Max systems may be integrated with cyclone or tornado technology. The biggest thing to know is that the E-Max system has the best effect on your water bill.

With this system, there’s a canister toilet flapper. It connects to the toilet handle and is mounted inside the tank.

But instead of a traditional flapper option, the tower design completely lifts up. This lets water enter the toilet bowl through a 360-degree angle.

Since the water can enter much faster, it generates more flushing power.

Kohler’s best example of this system is in the Class Five toilet models. These have an oversized flush valve to allow even more water into the bowl at once.

More importantly, more water enters than exits. As the water builds up in the bowl, it creates more pressure, which causes more waste to be siphoned out.

The technology helps to get rid of the contents of your toilet without using too much water.

The direction of the water makes a whirlpool.

Most water is directed through the two nozzles. However, a small portion of each flush goes directly to the trapway.

This allows the trapway to be cleared more quickly, which is ideal when you’re flushing a lot of waste at once.

The newest models from American Standard also use an oversized flush valve. For example, the Champion 4 toilet has a flush valve that’s 4 inches long, double the length of a traditional 2-inch design.

That means twice as much water can enter at once!

A toilet’s flush system is the way that it removes waste from the bowl. Different models use different systems.

The most powerful systems can flush waste without any clogs in the pipes.

Most toilets use a gravity flush system. Gravity and basic suction help to propel waste out of the bowl and into the sewer pipes.

Some toilets can’t use a gravity system because they’re installed beneath the sewer line. When the material needs to be pushed upward, these toilets usually use a pressure system.

This pressurizes the water through a pressurized air chamber, allowing it to move the waste forcefully upward.

Other flush systems tend to combine with one of these two options. Some are also made by a specific company.

For example, Toto has cornered the market on cyclone flushing. They’re also behind tornado flushing.

Though they aren’t the only company to use a two-jet system, they are the only one with the “cyclone” branding. American Standard uses a similar type of technology in their double vortex systems.

Kohler’s tower systems are unique in that they create more pressure and speed per flush. But they can also be a little noisy.