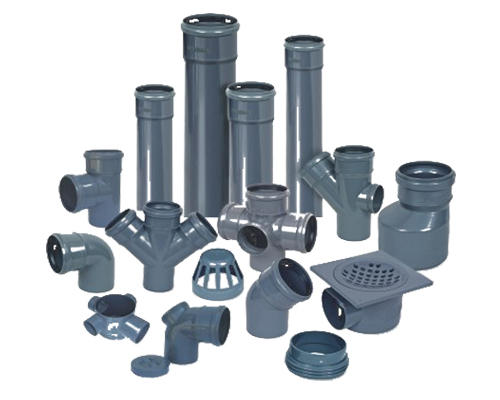 PVC piping is one of the most frequently used tools in plumbing, garage work, and other DIY projects. Most people are familiar with PVC pipes, whether they do a lot of DIY work or not.

But what you might not know is that there are actually several different kinds of PVC pipe.

It’s important to know the difference between the pipes. Every type is optimized for a certain task, which means that your life will be a lot easier if you choose the correct one from the get-go.

The vast majority of buildings in today’s world use PVC piping for their plumbing systems. If you’re living in a relatively new building or working in a new office, you can be almost certain that PVC pipes make up a solid portion of the infrastructure.

PVC stands for polyvinyl chloride. This is a type of plastic that can stand up to immense water pressure and heat without tears or cracks.

The plastic is also favored because it doesn’t tend to leech metals or other substances into the water.

Another reason that plumbers tend to prefer PVC pipes is because they can be repaired much more easily than copper piping.

Since PVC is a recyclable and sustainable material, it’s also a more environmentally friendly choice than copper. Though there is abundant copper on the surface of the planet, it is a nonrenewable resource.

Once we run out of it, there’s no way to get any more. The same goes for many other metals that might be used to create piping.

Plumbers usually just refer to PVC pipes as “plastic pipes.” So it sometimes surprises people to learn that there are several different kinds of PVC.

Every type of PVC is sustainable and recyclable. They are also extremely durable and safer to use than metals like copper.

But each different type is optimized for a different purpose.

Let’s take a look at the different options.

When you’re working with a PVC-U pipe, you’re using a substance that was created without the use of a plasticizer. Plasticizers are substances that are integrated into a plastic mixture to add softness and elasticity.

Because PVC-U doesn’t have any plasticizing agents, it tends to be much more rigid. It also doesn’t tend to be as smooth as other types of PVC.

You can use PVC-U for purposes including:

Pipes crafted from PVC-U are unlikely to bend due to pressure. They’re much more lightweight than copper, and they tend to be affordable.

Plumbers prefer to use PVC-U to transport drinking water because of the rigidity and versatility. They don’t tend to degrade easily over time.

They’re also resistant to chemicals and UV exposure, meaning that they aren’t subject to the same kind of corrosion as other materials.

C-PVC is a type of PVC pipe crafted with a high amount of chlorine. Manufacturers make them by chlorinating the PVC resin.

Initially, C-PVC was used in water distribution systems around 1960. However, there have been concerns about the manufacturing process.

In addition to being treated with chlorine, C-PVC tends to have additives like stabilizers, lubricants, and pigments. That has led to some concerns about potential contamination of water sources.

However, the manufacturing process has since been improved until the risks have been mitigated.

C-PVC is safe to use with drinking water. It is also corrosion-resistant. The biggest advantage that it has over PVC-U is that it can withstand a much greater range of temperatures.

For this reason, it is often used for transporting liquids at high temperatures in residential, commercial, and industrial settings.

Since C-PVC has plasticizing agents in it, it is significantly more flexible than PVC-U. While that makes it more susceptible to warping over time, it’s also much easier to install in areas that require complex shapes or bending.

Despite concerns, it has been proven that chlorine doesn’t have a negative impact on water quality. In fact, many municipalities choose to chlorinate water so they can make the tap water safer.

Chlorine kills many bacterial and viral agents that might be in your water.

PVC-O is a special type of plastic that is a miracle of engineering. Chemists have found that they can turn PVC-U into a denser, more layered form.

Like PVC-U, PVC-O doesn’t have any plasticizing agents. But it tends to be much stronger than an average PVC-U pipe.

Since the manufacturing process for these pipes is more involved, they tend to be more expensive. Because of this, they’re usually used in situations where PVC-U isn’t stable enough.

Some examples of good places to use PVC-O include:

PVC-O piping is even more corrosion-resistant than PVC-U. It is also better at preserving water quality thanks to its enhanced durability.

Municipalities often install it when there are conditions that could lead to leaks with traditional PVC piping.

If you’re doing a DIY project that involves any plumbing that’s frequently exposed to high water pressure, PVC-O might save you a lot of headache. These pipes are long-lasting and have a high hydraulic capacity, meaning that they can keep working for years.

PVC-Hi is the most recently created type of pipe. This plastic was designed by combining regular PVC with a variety of chemicals.

These chemicals improve the impact resistance and durability of the substance.

Regular PVC piping is favored by plumbers, but it can’t be used in every application. In some cases, it was simply too unstable to compete with metal piping.

But PVC-Hi addresses that issue with an alloy formed of PVC and polycarbonate.

Polycarbonate is known for being one of the most durable materials in the world. When combined with PVC, it allows for significantly improved stability under extreme pressure or extreme temperatures.

The PVC resin is strong enough to withstand massive impacts, and it doesn’t distort due to temperature fluctuations.

There are other PVC-Hi pipes that combine modified acrylic with vinyl acetate. These are just as rigid and resistant to impact as the polycarbonate ones.

These heavy-duty pipes are used whenever normal PVC piping can’t stand up to the temperatures or pressure. You’re likely to find it built into commercial sewage plants or systems that transport industrial liquid.

You can also use this material to connect two pipes together. It’s often favored because it won’t be damaged by the cutting process.

If you’ve been frustrated by damage to normal PVC pipes, PVC-Hi might be the solution you need.

The different types of PVC pipe play a big role in your plumbing. In many cases, you won’t need anything more advanced than standard PVC-U.

This rigid plastic is great for lightweight pipes and fittings.

But if you need a more flexible pipe, C-PVC might be a good solution. This material has plasticizing agents, which allow for greater flexibility.

At the same time, the durability is maintained.

PVC-O is a special type of plastic created by layering many levels of PVC-U. It is often used in situations where pipes are exposed to high pressure, but it can be pricey.

The most heavy-duty type of PVC is PVC-Hi. This combination of plastic and polycarbonate is super impact and temperature-resistant, so it’s a go-to for huge commercial and industrial projects.