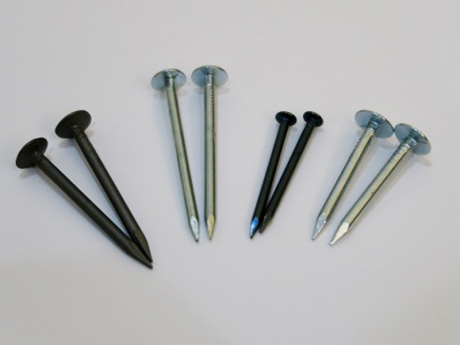 What Is A Drywall Nail

If you’re getting ready to hang drywall, you’ve probably read articles discussing the use of drywall nails and screws.

While drywall screws are much more prevalent for hanging drywall, nails used to be the norm. Some contractors still hang drywall with nails, although there are disadvantages to doing so.

Here’s what you need to know.

What is a Drywall Nail, and What Sizes Do They Come In?

Drywall nails have a cupped head and a barbed or ringed body. The cupped head allows them to be smooth against the drywall, while a ringed body gives them far more strength than a regular nail.

Some drywall nails have a cement coating for greater durability.

You’ll most often find drywall nails in three standard lengths: 1 ⅜ inch, 1 ⅝ inch, and 1 ¼  inch. They also come in various gauges. (Gauge is the diameter of the nail’s body.) 13 gauge is the most common size.

The size of nail you need depends on the thickness of the drywall you’re installing.

How are Drywall Nails Installed?

Since you don’t need special drywall tools to install drywall nails, they are an excellent option for homeowners or DIYers with limited tools. Nails are also a cheaper option than screws.

However, you’ll need to check building codes in your area before grabbing nails. Some regulations only allow screws for drywall installation – especially in commercial construction.

This is because screws have better holding power.

It also takes more nails to attach drywall panels to studs than screws. For example, USG recommends placing drywall nails at least every 8 inches on the wall, while you can space drywall screws every 16 inches.

While some drywall contractors use both screws and nails as fasteners, drywall nails are not nearly as prevalent as they once were. This is because they are not as strong as screws and are prone to loosen from wood studs causing nail pops and leaving indents in the drywall.

However, there are some benefits to drywall nails – they are inexpensive and easy to install, making them an excellent choice for a small project.