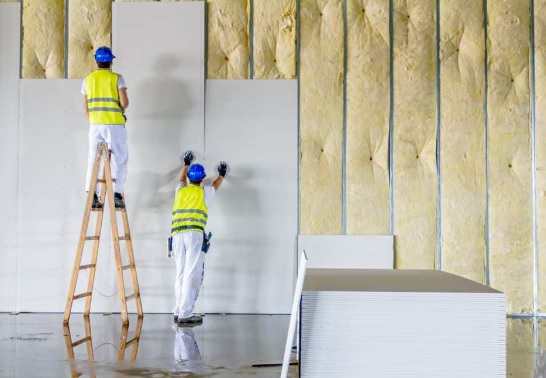 When Was Drywall Invented?

Drywall was invented in 1916 by the United States Gypsum Company (USG.) However, the use of it did not immediately catch on.

It wasn’t until the 1940s that USG was able to position itself as a leading building supplier. By the 1950s, drywall had become a prominent building material.

Drywall is now the most commonly used interior wall material in the U.S. and other parts of the world.

Here are some other interesting facts about the history of drywall.

What Is The History Of Drywall?

In 1909, USG acquired the Sackett Plasterboard Company that created Sackett Board, a paper and plaster wallboard.

The Sackett Board continued to evolve throughout the next several years until the company finally created the brand you know as SheetRock – a gypsum-based wall covering that wouldn’t warp or burn.

It took a while for SheetRock to catch on, but by the 1940s, USG had positioned itself as a leading home improvement supplier in America.

Since then, many other drywall brands have popped up and evolved. As a result, we now have several drywall options, including standard panels, fire-rated drywall, and purple board.

What Was Used Before Drywall?

Builders would plaster walls by installing wooden strips called laths and then put wet plaster over them. Plastering was a labor-intensive project requiring long waits for each coat to dry.

When Did Drywall Replace Plaster?

Drywall was invented in 1916 by the USG company but didn’t become mainstream until the mid-1900s. However, the housing boom in the 1940s helped USG position itself as a leading home supplier, and by the 1950s, Sheetrock became commonly used.

Drywall is a standard in homes across the world today. However, it wasn’t always.

Before drywall, there was plaster. However, plaster was both time and labor-intensive. It wasn’t until the mid-1900s that drywall use took off.

Since then, drywall has remained the most commonly used interior wall material in the United States and many other countries.