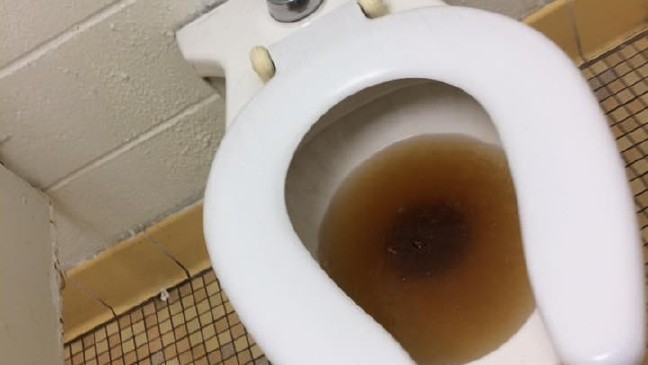 Why You Have Brown Toilet Water

Sometimes you’ll encounter brown water in your toilet bowl. The brown color can be caused by a number of different things.

If you’re asking, “Why is my toilet water brown?” then the most likely answer is rust. Another option is that the water supply has high iron levels.

A mineral deposit or rust isn’t dangerous to your health. However, it can lead to discoloration in your toilet tank and bowl.

Rusted pipes can also lead to iron bacteria growth, which might be a health hazard.

If you’re concerned about corrosion of your plumbing system, you should definitely call a plumber. A plumber will be able to assess the situation and determine whether the corroded pipes should be replaced with PVC.

Let’s examine some of the most common causes of brown water in toilet.

If you notice brown water in the toilet for the first time, you should run the flush cycle. Sometimes organic matter can cause brown discoloration if it isn’t flushed fully.

If clear water flows in from the tank, then you’re good to go. If the new water is discolored, then there are bigger plumbing issues at play.

A rusty pipe might be the culprit. Turn on the faucets in other parts of the house.

First, check your bathroom sink and shower taps. Then check your kitchen and any outdoor taps.

If all of the water is brown, then you have a widespread problem. It is most likely related to corroded iron pipes.

This is especially likely if your plumbing system was installed prior to 1960. The rust from the toilet pipes is causing the water to be discolored.

In this case, your water might taste metallic. You might also notice reddish clothing stains after you use your washer.

A plumber will have to do an assessment. In extreme cases, you might have to replace all of your iron or steel pipes.

While this may be costly, it’s the only viable solution for the long term.

In the short term, you can buy water softeners on Amazon. These chemicals are additives that remove iron bacteria and lower the amount of iron in the water.

Keep in mind that this won’t entirely purify your system. But it can help.

Chlorine is also a worthwhile purchase through an Amazon associate. This can work with a water softening system to get rid of iron bacteria.

The material causes the iron to oxidize, so the bacteria dies.

This option is only possible if you use well water. But if there is organic material clogging the well, it can lead to brown water.

Clogs like this are usually caused by animals falling into the well and creating a blockage.

It’s also possible for sediment to seep into your well water. The presence of sediment indicates that the purity of the well has been damaged.

Sometimes the cause is construction or landscaping. Other times, it happens due to extreme weather.

If you suspect that you have well damage, you should call in a professional to do an assessment.

If you check your faucets and find that only the toilet water is brown, then the issue is related to the toilet. The pipe feeding into the toilet might be rusty.

Or parts of the toilet itself might have rusted.

Check the water supply line for rust. Look behind the toilet tank for obvious signs of corrosion or damage.

If nothing is there, then the toilet connector is the likely culprit.

In this case, all you have to do is locate and replace the rusty toilet component.

Maybe you have new plumbing and a city water supply. If that’s the case, how could rust or a well be the problem?

It likely isn’t. Instead, your pipes might have gotten clogged by mineral deposits like calcium and manganese.

Both calcium and manganese turn brown when they oxidize. In addition to being in the water supply, they might also be found in some toilet cleaners.

If you flush the cleaners down the drain, the minerals might build up slowly and then cause a blockage.

Blockages will restrict the movement of water. You might notice your toilet draining slowly.

Alternatively, you might notice a decrease in water pressure when you flush the toilet or run your other faucets.

Minerals like this can cause problems by hastening the formation of rust. They can also cause buildup on the toilet tank.

Instead of being smooth, the pipes and tank will create a sticky surface that’s more prone to clogging.

Sometimes you can clean a mineral buildup yourself using hot water and white vinegar. Sometimes you need a professional’s help instead.

You might not realize that a pipe is blocked. But if part of your drain is blocked, then organic waste might back into the toilet bowl.

This will lead to brown water and discoloration.

If plunging the clog doesn’t work, you might need professional help. A plumber will be able to figure out the cause of the clog and remove it.

Blocked sewer lines can burst if too much pressure builds up. That’s much more serious and costly than a basic cleaning.

In addition, depending on the location, burst pipes can flood your walls or home with waste. That will lead to mold, bacteria, rot, and terrible odors.

Brown water isn’t generally dangerous. It’s usually a sign that there is iron or another mineral deposit in your pipes.

You’ll need to test your other faucets to determine the likely cause.

Despite not being dangerous, this kind of discoloration can be a concerning sign for your plumbing system. Oftentimes, it means that your pipes are rusted.

Rust is especially common in older systems that use iron and steel pipes instead of PVC.

A plumber will generally be able to locate the rusty pipe. Then they’ll be able to tell you whether you need to replace your entire plumbing system.

In the meantime, you can use water softeners and chlorine to dissolve iron and break up bacteria in your water supply.